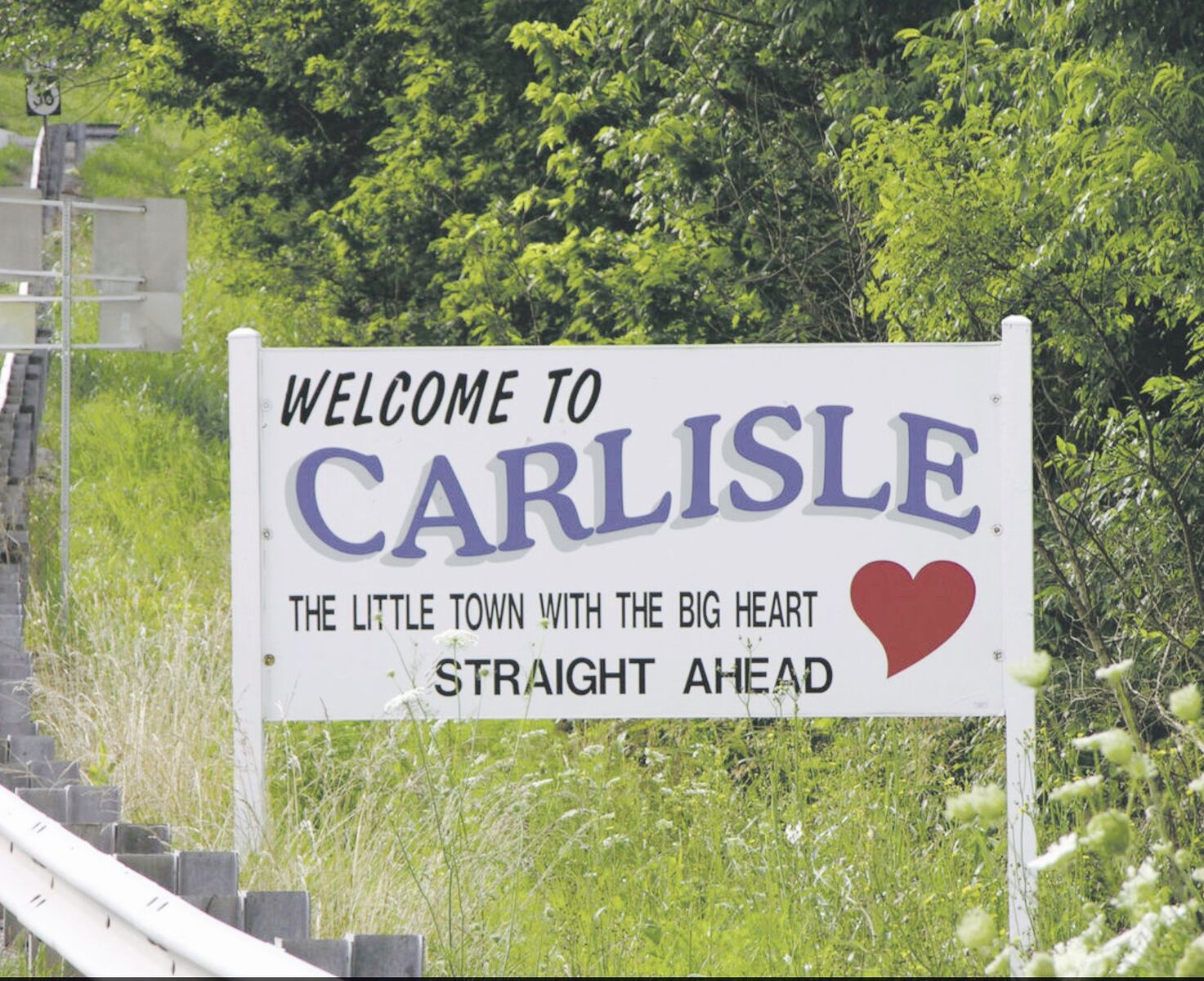 Nicholas County, the forty-second county in order of formation, is located in the Bluegrass region of Kentucky. The county is bounded by Harrison, Robertson, Fleming, Bath and Bourbon counties and contains an area of 197 square miles, most of which is hill country. The county was formed in 1799 from Mason and Bourbon counties and was named for Col. George Nicholas of Fayette County, a Revolutionary War veteran and a popular lawyer in early Kentucky. Carlisle has been the county seat since 1816. Robertson County, the smallest county in the state, was formed from Nicholas County in 1867.

Large prehistoric mammals that inhabited Kentucky after the last Ice Age were drawn to the salt licks at what is now Blue Licks Battlefield State Park on the Nicholas-Robertson county line. In the early historic era, buffalo created trails through the area to the licks. These trails were used by Indians on hunting trips and by pioneers such as Daniel Boone and Simon Kenton, who came to the licks to make salt. The Buffalo Trace, later known as Smith's Wagon Road, became an important connection between the Ohio River at Limestone (now Maysville) and Lexington. The existence of the road, sixty feet wide in places, was the prime reason for the settlement of the county. The Limestone Road was the first macadamized road in the state and is now part of Highway 68.

The first settlement in Nicholas County was made at Blue Licks around 1784 by David Tanner. Blue Licks, which has been known as Salt Springs, Lower Blue Lick Springs, and Blue Lick Springs, received its name from the blue-gray deposit left by mineral water between the original spring and the Licking River. The water in the spring drained toward the river, creating a quagmire that trapped thirsty animals attracted to the salt.

In 1800, the first session of the county court was held at the home of Martin Baker, Jr., at Lower Blue Licks. In August of 1800, the court began meeting in the new courthouse at Blue Licks. Typical court matters during the early years included issuing orders for surveying roads, appointing overseers for construction crews, issuing licenses to tavern keepers, inventorying estates of deceased persons, and granting permission for construction of gristmills and routes for the transportation of salt water from Blue Licks. A new county seat named Ellisville was established in 1805 on the James Ellis farm along the Lexington- Maysville Road. A log courthouse was built there the same year. The county seat was moved to Carlisle in 1816.

During the mid-1800s, Blue Lick Springs in Nicholas County became a spa, where wealthy travelers flocked to enjoy the rejuvenating effects of mineral water, which was bottled and shipped all over the world. Two cooper shops were kept busy making staves and assembling kegs and barrels to ship the water in bulk. At one time the Arlington Hotel at Blue Licks had three hundred rooms. There was also a military school at Blue Licks around 1848, where James G. Blaine, an 1884 presidential candidate, taught prior to becoming a politician.

The Lexington & Maysville Railroad (later a part of the Louisville & Nashville and in 1990 part of TTI Systems, a local short line) was completed to Carlisle by 1871. It brought many visitors through Carlisle to Deering Camp, a Methodist religious camp at Parks Hill with fifty-two cabins, which closed in 1912. As many as 10,000 people were said to have attended a Sunday service at Deering Camp. On August 17, 1910, Carlisle Mercury reported, "A train out of Lexington passed Carlisle going to Parks Hill with eleven coaches filled and overflowing. Both trains out of Maysville were crowded. Three thousand tickets were sold by L&N Railroad (700 here)."

Nicholas County resident Leason T. Barlow is credited by some with having invented the Barlow knife, and R.C. King of Carlisle obtained a patent for a bluegrass seed stripper around 1870. The county has produced several authors, including Barbara Kingsolver, who wrote The Bean Trees (1988); Frank Mathias, who wrote G.1. Jive (1982); and Eslie Asbury, who wrote Horse Sense and Humor in Kentucky (1981). Walter Tevis, who wrote The Hustler (1959), taught for one year at Carlisle High School.

Within the county's boundaries is the 500-acre Lake Carnico Development District, which includes a 150-acre lake. The county is also the site of the Clay Wildlife Management Preserve.

The population of the rural county:

During 1793 an "old log meeting house" was erected near the intersection of Taylors Creek Road and Concord Road, at that time in Bourbon, now in Nicholas County. The Concord Church began as a Presbyterian Church with Robert Finley, its first minister, also serving a budding congregation at Cane Ridge. In 1798 Barton W. Stone came from North Carolina to serve both congregations.

In 1801 Stone, already questioning his Presbyterian beliefs, conducted revivals at both churches. General religious fervent on the frontier led to massive revival meetings. The one at Cane Ridge is said to have attracted up to 20,000 people, camping in the area and hearing a host of ministers, departing only when the feed for their horses was exhausted.

The Cane Ridge revival has been described as "one of the greatest revivals in the history of the Church." It was highly significant in American religious history as the incubator for what became the Christian Church, in which Stone and other members described themselves as "Christian only." The Concord Church made the creative decision to let Presbyterians and those terming themselves Christian share the church. A Presbyterian mission church was established in Carlisle in 1821, but the Concord Church was shared until 1851. That building was replaced in 1859.

John Kincart & The Founding of Carlisle

John Kincart, who was born in 1791 in what became Nicholas County, inherited a 200 acre farm from his father, Samuel, in 1813. In 1816 he provided 50 acres, including the family's peach orchard, to establish the City of Carlisle. Streets and lots were laid off around the center of the plot, with Kincart accepting lots as payment for his land. The monument to his father can be seen on the north side of the present county courhouse, the third of three courthouses on the site.

Kincart and his wife, Isabelle, had six children who grew up together with the expanding town. Kincart died in 1868, as did Isabelle, and was buried in the cemetery where the Shiloh Presbyterian Church once stood on Whetstone Road.

Slaves breaking away from pre-Civil War bondage traveled what became known as "The Underground Railroad." The path to safety lay through Nicholas County, as well as other areas leading toward Ohio and north to freedom in Canada.

John Rankin, a native of eastern Tennessee, was from an early age strongly and deeply opposed to slavery. A minister by profession, he determined to move his wife and young famiy to Ohio, where slavery was not practiced. On the way, and short on funds, he stopped in Carlisle, Kentucky. The Concord Presbyterian Church needed a minister, and Rankin filled that role from 1817 to 1821, before moving on to Ripley, Ohio. There, he and his growing family worked with like-minded friends to welcome slaves escaping across the Ohio River and to send them on to other safe houses. In this manner slaves moved along a chain to freedom.

While Nicholas County's rugged landscape made it less profitable to work slaves, there were slaves in the county. One country home, the Hayden-Briarly farm on Somerset Road in the southern part of the county, had until recently shackles for slaves in its basement. But, tradition also holds that safe houses, such as the house at 105 West Chestnut Street in Carlisle, provided slaves with a place to rest, before they continued their journey.

Henry Clay (1777 - 1852) was one of the foremost national statesmen of his day, admired by, among many others, his fellow Kentuckian, Abraham Lincoln.

After establishing a law practice in Lexington, Clay served in the State Legislature and also taught at Transylvania University in Lexington. He was a senator from Kentucky during the turbulent 1830's and '40's, when the national struggled with issues which ultimately led to the Civil War.

Clay's friendships included several in Nicholas County. Visiting Thomas Metcalfe, tenth governor of Kentucky, at his home on what is now Highway 68, he exclaimed, "Tom, you have a veritable forest retreat here," and the name remains to this day. Another prominent Nicholas Countian, Thompson S. Parks, lived at Parks Hill on the Licking River and entertained Clay, as he went to and from Washington, D. C. One of Parks' descendents treasures a flo-blue dinner plate which, family history holds, was part of a set presented to Parks by Clay. Clay is also remembered for his gift of gingko trees for county friends. One still stands on property at the corner of Locust and North Street in Carlisle.

Buffaloes were among our first road builders. In Nicholas County, as in many parts of our country, the ponderous buffalo, in finding its way from point to point, invariably selected the highest and best routes. These are, in large part, still used today in our county.

Early pioneers and settlers used the buffalo built road, or "trace", to work their way toward Lexington and central Kentucky from the river landing at Limestone, known today as Maysville. As danger from Indians gradually diminished, gradual improvements were made to the road. Thomas Metcalfe andHenry Clay worked with President Andrew Jackson to raise investment capital from private sources. A much-improved road was built and supported by tolls collected every four or five miles. One of the toll houses at the edge of Nicholas and Bourbon Counties on Highway 68 has been torn down, but a historic marker still reminds us of its location.

As stagecoaches became the principal means of travel, travelers stopped at Forest Retreat Tavern, still standing on Highway 68, across from Forest Retreat. It was known as "one of the most lavish and hospitable taverns;" horses were stabled across the road in the old post barn which still stands today. Presently, the property is owned by Dr. and Mrs. Phillip Tibbs of Lexington and Carlisle.